Here in Dhimmiland UK, news just in that a female employee of British airline BMI has been sacked – because she refused to wear an ‘abaya’ and walk behind male colleagues when in Saudi Arabia.

I kid you not. This is the story, courtesy of the Times Online:

“A BRITISH air stewardess was sacked for refusing to fly to Saudi Arabia after she was ordered to wear a traditional Islamic robe and walk behind male colleagues.

Lisa Ashton, a £15,000-a-year stewardess with BMI, was told that in public areas in Saudi Arabia she was required to wear a black robe, known as an abaya. This covers everything but the face, feet and hands. She was told to follow her male colleagues, irrespective of rank.

Ashton, 37, who was worried about security in the country, refused to fly there, claiming the instructions were discriminatory. She was sacked last April.

“It’s outrageous. I’m a proud Englishwoman and I don’t want these restrictions placed on myself.”

Earlier this year an employment tribunal in Manchester ruled that BMI was justified in imposing “rules of a different culture” on staff and cleared it of sexual discrimination. Ashton has consulted Liberty, the human rights organisation, and may seek a judicial review of the decision.

Ashton joined BMI in March 1996, flying to the Caribbean, the United States and India. Based in Manchester, she was told in the summer of 2005 that BMI was starting a service to Saudi Arabia and she might be required to work on it.

The Foreign Office was then advising visitors of a “threat of terrorism” in the country. Ashton did not want to travel there because of the security risks, and was offended by the rules for staff travelling to the region.

A BMI document circulated to staff who might travel to Saudi Arabia stated: “It is expected that female crew members will walk behind their male counterparts in public areas such as airports no matter what rank.”

Staff were also given abayas and were required to put them on when leaving the aircraft.

Ashton, a practising Christian, was advised by union officials that it was considered a part of the uniform and she could face disciplinary action if she did not wear it.

Why the hell should any NON Muslim woman, from a NON Muslim country, be forced to don traditional Muslim garb? Do Muslim women from Saudi Arabia take OFF their abayas when visiting Britain? No, of course they blinking well don’t!

As usual, it’s we ‘infidels’ that are being required to change and give up our rights in order to fit in with Islam.

And for a British company to be the force behind this latest travesty is alarming. Of one thing we can all be sure: this is not the first such incident, and it won’t be the last.

Christianity had the Crusaders. Judaism has produced a few raving Rabbis. And Scientology has…….well, Tom Cruise…

Then there’s Islam. A faith that actually orders its followers to set up Sharia law and Islamic rule in non Islamic states. A faith that tells its members that hey, it’s fine to lie to non Muslims; it doesn’t count! A faith that exhorts its acolytes to kill ‘infidels’ and that to die in service to Allah is a good thing, a noble thing.

No. Islam is inherently different to other faiths.

And if more of us don’t wake up to this reality pretty soon, we may learn more about life as a dhimmi than we bargained for.

For across the globe, the voice of the infidel – the non Muslim – is growing weaker.

Then in 2006, the row exploded over the Danish cartoons depicting Mohammed. At first, the Brits chuckled. Oh, those mad Muslims! Getting all upset over a drawing! The Brits rolled their eyes and cracked jokes about it.

They soon stopped smiling when 10,000 Muslims took to the streets, going beserk at the mere idea of the cartoons being published: 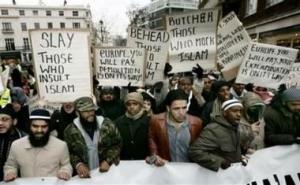 The Brits hadn’t anticipated such rage:

So the British media gave in to this mass temper tantrum on the part of the Muslim community – and didn’t run the Mohammed cartoons.

And it’s been a case of placating British Muslims ever since. Now, in 2009, there are parts of the country labelled as ‘ no go’ for non Muslims. And in other towns, the Islamic calls to prayer can be heard echoing through the streets, five times daily from local Mosques.

Even police dogs must now wear little booties if entering a Mosque or home of a devout Muslim, as bare footed dogs have ‘offended’ some in the Islamic community.

Across Europe, it’s the same story. And woe betide any non Muslims who dare to speak out – they are instantly branded as ‘islamophobic’. In several countries, Islamists have issued death threats against infidels who have dared to challenge the religion. Some of those threats were carried out.

Of course, there are also many moderate Muslims who are unhappy about what radical Islamic groups are getting up to. But they need to shout so much more loudly for us to hear them above the racket coming from the extremists.

Meanwhile, we, the infidels, must speak up.

Let’s face it, if we don’t, nobody else is going to!