So, it’s finally started. The trial in which Dutch MP Geert Wilders stands accused of, well, criticising Islam.   Of course, it’s being worded differently. Wilders is charged with ‘inciting hatred and discrimination toward Islam.’  If he’s found ‘guilty’, he could very well end up in prison.

Meanwhile, those extremist Muslims who constantly express hatred of all things non Islamic are at liberty to preach hatred and the Joys Of Jihad across Europe, including in the Netherlands where Wilders is now fighting to remain a free man.

I’ve said it before and I’ll say it again: all religions are ideologies. They are thus open to critique and yes, condemnation. As long as those who wish to follow said religions are not prohibited from doing so, nor attacked for doing so, there is nothing wrong with openly criticising any faith. 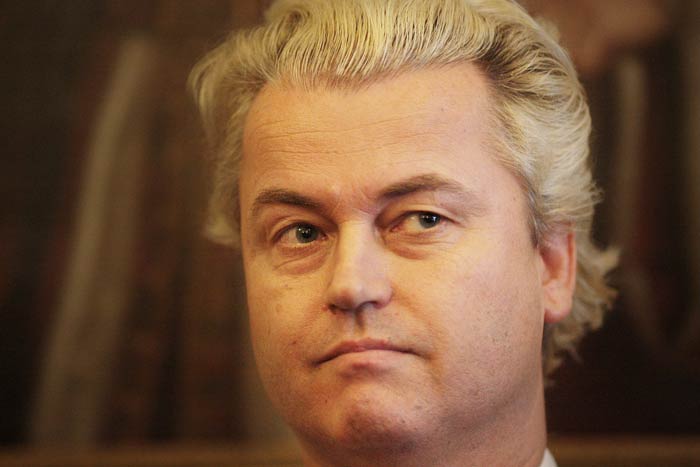 ” Mister Speaker, judges of the court, I would like to make use of my right to speak for a few minutes.

Freedom is the most precious of all our attainments and the most vulnerable. People have devoted their lives to it and given their lives for it. Our freedom in this country is the outcome of centuries. It is the consequence of a history that knows no equal and has brought us to where we are now.

I believe with all my heart and soul that the freedom in the Netherlands is threatened. That what our heritage is, what generations could only dream about, that this freedom is no longer a given, no longer self-evident.

I devote my life to the defence of our freedom. I know what the risks are and I pay a price for it every day. I do not complain about it; it is my own decision. I see that as my duty and it is why I am standing here.

I know that the words I use are sometimes harsh, but they are never rash. It is not my intention to spare the ideology of conquest and destruction, but I am not any more out to offend people.

I have nothing against Muslims. I have a problem with Islam and the Islamization of our country because Islam is at odds with freedom. Future generations will wonder to themselves how we in 2010, in this place, in this room, earned our most precious attainment.

Whether there is freedom in this debate for both parties and thus also for the critics of Islam, or that only one side of the discussion may be heard in the Netherlands? Whether freedom of speech in the Netherlands applies to everyone or only to a few?

The answer to this is at once the answer to the question whether freedom still has a home in this country. Freedom was never the property of a small group, but was always the heritage of us all. We are all blessed by it.

Lady Justice wears a blindfold, but she has splendid hearing. I hope that she hears the following sentences, loud and clear: It is not only a right, but also the duty of free people to speak against every ideology that threatens freedom.

Thomas Jefferson, the third President of the United States was right: The price of freedom is eternal vigilance.

I hope that the freedom of speech shall triumph in this trial.

In conclusion, Mister Speaker, judges of the court. This trial is obviously about the freedom of speech. But this trial is also about the process of establishing the truth. Are the statements that I have made and the comparisons that I have taken, as cited in the summons, true?

I refer not only to Mister Jansen and Mister Admiraal, but also to the witness/experts from Israel, the United States, and the United Kingdom.

Without these witnesses, I cannot defend myself properly and, in my opinion, this would not be an fair trial. “

Has Denmark caved and banned Dutch MP Geert Wilders? Wilders, you will recall,  caused an international furore when he made the film ‘Fitna’, which exposes the violence at the heart of Islam.

Britain shamefully banned Wilders – now reports are coming in that Denmark has done the same and cancelled a conference on free speech to which Wilders was invited by the Danish People’s Party.

The conference was scheduled for February, then delayed until June, the Copenhagen Post reports: “But now, according to information received by Berlingske Tidende newspaper, the conference has been delayed again because of government’s concern over Geert Wilders.”

The Danish Foreign Ministry fears Muslims will not attend a climate conference in Denmark if Wilders is permitted to warn about the dangers of Islam at the free-speech conference.

But let’s recall just what happened when Britain banned Wilders. Wilders had been invited to screen Fitna at the House Of Lords. Problems only arose after several Muslim pressure groups approached Lord Ahmed, a Muslim peer. Ahmed then threatened to ‘mobilise’ ten thousand Muslims ‘in protest’ if Wilders was allowed to set foot in the House of Commons.

Much to the disbelief and anger of millions of Brits, home secretary Jacqui Smith caved – and banned Wilders from entering the UK. Oh, and one more detail: a mere two weeks earlier, Wilders was in Britain. Clearly the only thing that changed in the intervening fourteen days was the temper tantrum thrown by Lord Ahmed.

Let’s also note that for the past few years, Wilders has been living under the shadow of the ‘fatwa’ issued; numerous Muslim death threats, in fact, have been hurled his way. He has to change addresses every few days and has a 24 hour guard.

Yet the British border agency said it was Wilders who threatened harmony and public security!

France has also shown itself to be a nation of Dhimmis. The French Association for the Defense of Human Rights announced that it wanted the authorities to prosecute Wilders for “hate speech.”

‘hate speech’???  All Wilders did was cite the Quran.

Happily, there are still some places on this planet that are willing to stand up to Islam. In April, Wilders received a free-speech award from the Florida Security Council at the group’s Free Speech Summit, where he explained precisely what Islam is and isn’t:

“The take-over of Europe is part of the global fight of Islam for world domination. Islam is not a religion. It is a political ideology. Islam’s heart lies in the Quran. The Quran is a book that calls for hatred, violence, murder, terrorism, war and submission. The Quran calls upon Muslims to kill non-Muslims. The Quran describes Jews as monkeys and pigs. Churchill compared the Quran to Adolf Hitler’s Mein Kampf. The core of the problem with the Quran is twofold. First, the commands in the Quran are not limited by place or time, they apply for all time, to all Muslims. Second, the Quran is Allah’s personal word. That leaves no room for interpretation.

As if to affirm Wilders’ depiction of Islam, the Council on American-Islamic Relations (CAIR)demanded that Florida’s state Rep. Adam Hasner, who co-hosted the event, resign his post as Republican leader in the Sunshine State’s House of Representatives.

Note: CAIR was an unindicted coconspirator in the federal government’s successful prosecution of the Holy Land Foundation for Relief and Development for its funding the terror group Hamas.